Technology helps make the world more accessible to the disabled people and we have seen innovations such as GPS powered Walking sticks, hearing aids that pair with your iPhone, autonomous wheelchairs, and the list goes on. Dot Watch is the perfect example of the innovative consumer products aimed towards people with visual impairment. It is a Smartwatch with a refreshable braille display and other useful functions. I have been using the Dot Watch for a while and with that being said, here is my review of Dot Watch.

Dot Watch Review: In A League Of Its Own

The Dot Watch comes in a white box that has information in both English and Braille. You get an in-depth guide to help you get started with the Watch, the manual is really easy to understand and has instructions in Braille as well. You get the Dot Watch and a charging adaptor in the box. Even though the Watch says 3 on the Dial, it is still called just Dot Watch. 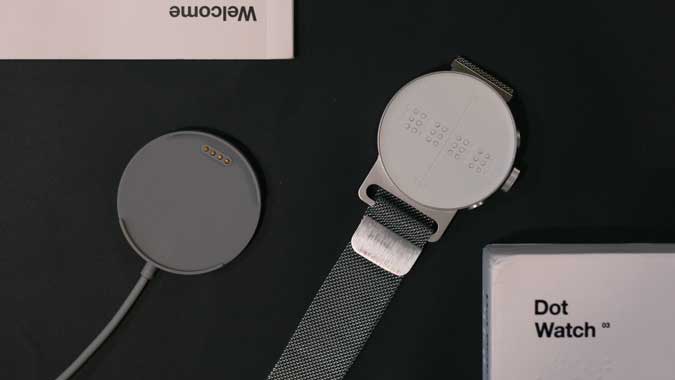 The watch looks and feels premium with an Aluminium body bonded by a steel strap and a magnetic buckle. The back of the watch has a pogo pin connector where the adaptor snaps on and charges the watch. The watch dial is a clean white surface but has a lot of technology embedded in it. It is a scaled-down version of the Refreshable Braille Display that has been molded into a smart Watch.

The dial is divided into two sections separated by a line in the middle to make it easier to navigate with touch. It has four braille cells with 6 dots each that can produce any Braille character by raising and lowering the dots. The dots in a cell are really tactile to touch and hold their position when in use. It may not be visible but the dial also has two touchpads on either section of the dial right under the braille cells that will be used to navigate and read out notifications. We’ll come back to that in the latter part of this review.

The watch also has a “Tactile mode” that allows you to use the Watch even if you don’t know Braille. 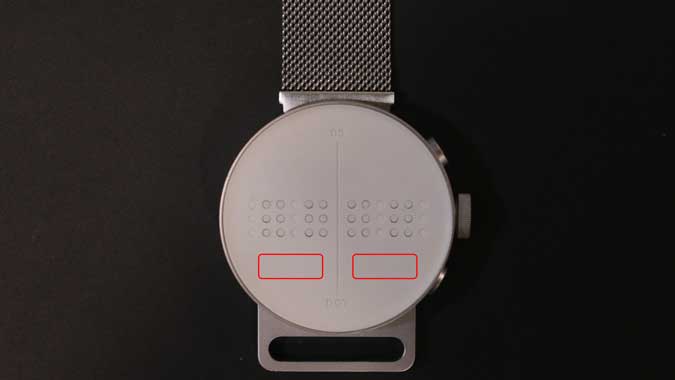 Other than the dial, you have two buttons and a crown on the right side of the watch that would be used to access the entire interface of the watch. You can even rotate the interface upside down using the app to make it more convenient for people wearing it on their right hand.

Dot Watch has two modes; you can either use it standalone or pair it with a smartphone. If you pair it with a smartphone using the Dot Watch app, you would be able to read out notifications on the Watch itself and that is really impressive. Pairing the watch to the app is simple much like any other smartwatch on the market and you can use it with both Android and iPhone. Dot Watch tells you the current time, date, battery level, and notifications. You can also set a timer on the watch and start a stopwatch to time things.

Even though the instruction manual has sufficient information on how to use the Watch, I want to add some personal insights. The button on the top is the Select button, and the button on the bottom is the Home/ Power button. Pressing the Home button lowers all the dots and puts the Watch in rest mode.

Navigate the Watch Menu: You can access the Dot Watch features by rotating the crown. Press Home to ensure all the cells are inactive. Now, rotate the crown clockwise until you get vibrational feedback. It would mean that you’re on the first menu option. You can start rotating the crown counter-clockwise slowly to scroll the menu. The cells would raise the letters and you can select the menu option by pressing the select button. 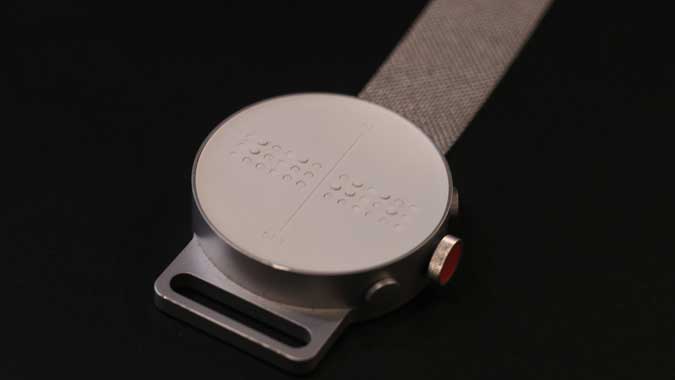 Read Notifications: Reading notifications on the Dot Watch is easy. Simply rotate the crown until it reads ‘NOTI’ on the dial and presses the Select button. If there are no notifications, it would just read “NONE” otherwise it will start raising the letters. As there are only four cells, you are limited to four characters but you can tap the touchpads below the cells to scroll forwards and backward.

Tactile Mode: The Tactile mode is designed for users who don’t know Braille. Instead of showing Braille characters, this mode would tell you time by raising the number of pins. For example, to show 6:02 it will raise 6 dots on the left part of the dial and two dots on the right part. The Tactile mode is only limited to basic functions of the Watch and still show any notifications in Braille.

I highly recommend using the Dot Watch 2 app as it offers additional features. For starters, you won’t have to manually set the time and date if you pair it with the smartphone. You would be able to read smartphone notifications right from the watch. The app supports multiple languages such as Korean, English, Spanish, German, French, Russian, Arabic, Chinese(Simplified), and Vietnamese.

You would also be able to add memos to the Watch from the app. This feature would come in handy if you want to jot down something important and read it out later. Apart from that, you can enable hourly alerts, set alarms on the Watch, and even find the Watch from the app. I would’ve liked it even more if the Watch made a sound but right now it just vibrates. 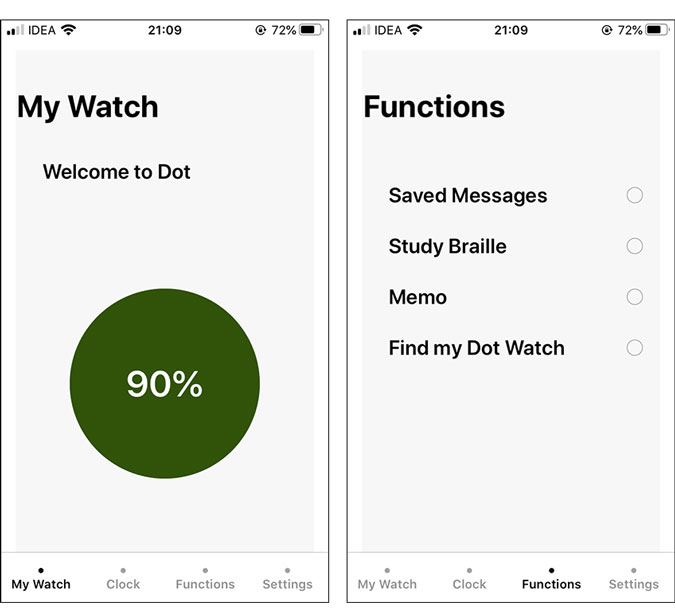 If you’ve never used a refreshable Braille Display before then the Study Braille feature will come in handy as it will help you get familiar with the letters and numbers on the Watch. To use it, you send a letter, word, or a number to the Watch and the Watch displays it on its dial.

The Dot Watch doesn’t mention the battery capacity on their website but claims a 10-day battery backup. During my brief testing period, the battery did last for around a week. However, the battery consumption may vary based on your usage so you should expect an uptime of around 7 days to a week.

I really enjoyed using the Dot Watch but I had to make a conscious effort to prevent any water splashes on the Watch. Considering it has 24 holes and mishaps always happen, I would’ve preferred if the Dot Watch came with an IP rating or Water resistance of some sort. Other than that, it is an impressive piece of tech.

Dot Watch retails at around $299 and you can purchase the Watch from their official website. Currently, they ship the Watch to addresses in North America, South America, Europe, Asia-pacific, and Middle East/ Africa. You can also place an order by writing an email to buy@dotincorp.com

Dot Watch is not a run of the mill product and obviously, doesn’t fit in the traditional Smartwatch category. It is specifically designed for people with visual impairments. Dot Watch doesn’t compromise on the build quality and offers useful functions which makes it an easy sell. In case you resonate with the features offered by the Dot Watch then you should definitely check it out as it surely lives up to its claims. Having said that, you can also check out the Apple Watch which is more feature-rich and offers a VoiceOver mode for the visually impaired. Let me know in the comments if you’re going to buy this Watch or connect with me on Twitter.

A Smartwatch designed for the visually impaired. It is based on a Refreshable Braille Display technology that is widely used in PC interface equipment designed for navigation.